As the birthplace of the Ford Model T car, the Ford Piquette Avenue Plant is recognized as one of the most significant automotive heritage sites in the world. 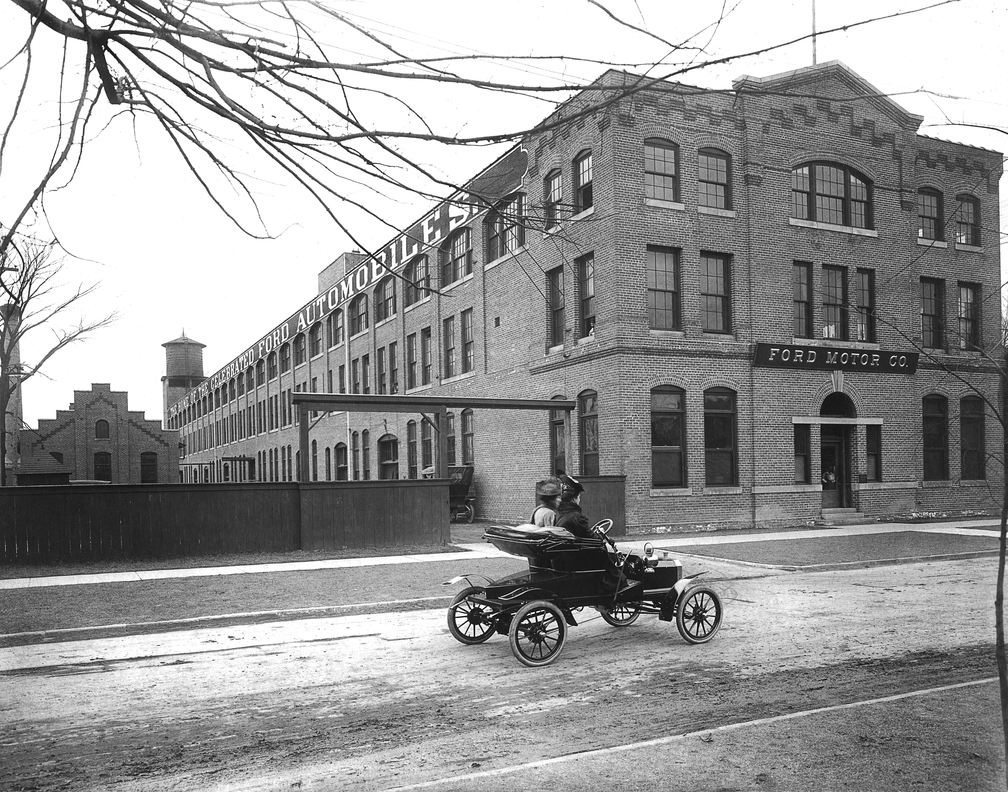 The 1858 intersection of two railroad lines—Detroit & Milwaukee, and Chicago and Detroit & Canada Grand Trunk Junction—had created a natural location for Detroit manufacturing, with easy access to national distribution by rail. Called Milwaukee Junction, it became the hub of Detroit’s emerging auto industry in the early 1900s. It was a natural choice for Ford Motor Company’s new plant in 1904.

HENRY FORD ON THE CUSP OF FAME

Henry Ford had previously started two auto companies, which failed both times. However he’d had some success at auto racing and built his reputation by winning. On June 16, 1903, Ford and a group of investors organized Ford Motor Company. Henry Ford was named vice president, investing his knowledge, experience, reputation, and hard work—but no cash. This new company was just one year old and already building its own state-of-the-art brick factory!

In the summer of 1904, as the Piquette Avenue Plant was being constructed, Henry Ford turned 41 years old. Henry, his wife, Clara, and their son, Edsel, rented a brick duplex a few blocks away. Henry usually walked or bicycled to work.

By 1907, Ford had the country’s best-selling car, the Model N. By 1908, 14-year-old Edsel was drawing cars and coming to the plant almost every day after school to see developments in the secret experimental room, where a small group of talented men led by his father were busy hashing out a new model behind closed doors. 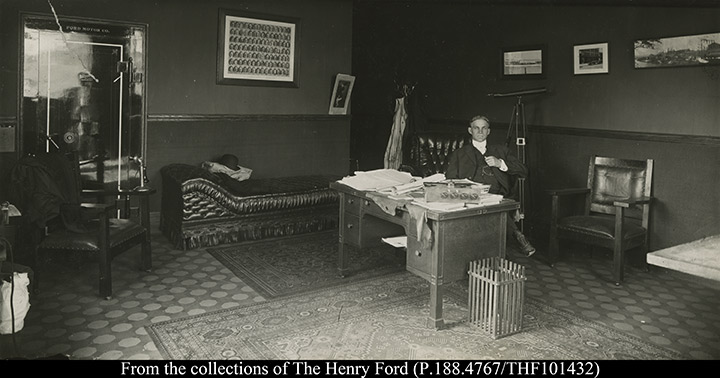 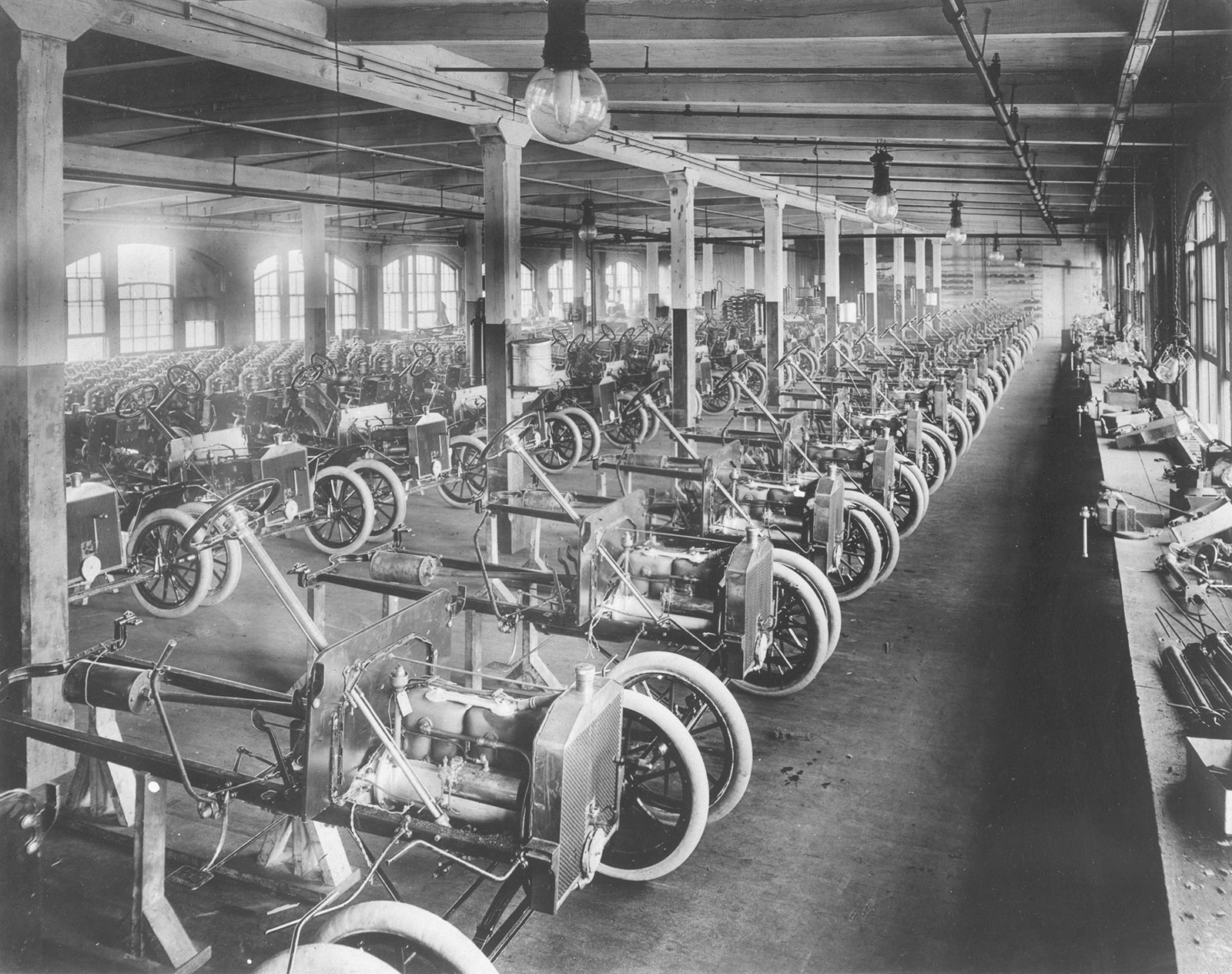 In 1904, a visitor entering Ford Motor Company’s front door would find the company’s business offices, including sales, purchasing, and the office of influential company secretary and business manager James Couzens.

Henry Ford’s office was on the second floor, closer to where the action was—at least the action he preferred! Visitors rarely found him in his office. Across the hall was the room used by talented mechanic and longtime Ford friend Ed “Spider” Huff. Just behind Ford’s corner office was an office for C. Harold Wills, the man in charge of drafting and design. Up on the third floor, in the front of the building, was the drafting room.

The rest of the building was constantly in flux as different models came and went and production methods improved. Manufacturing so many cars in such a small space was a challenge ably met by P. E. Martin, who was in charge of the Assembly Department at Piquette, with Charles Sorenson as his assistant. When the company needed more room, it added outbuildings west of the plant, quickly filling the available space. Even before the Model T, it was clear that the young company needed more room.

BIG AND COSTLY vs. SMALL AND INEXPENSIVE

For years, Henry Ford had battled a faction of company directors over the type of car the company should build. Some favored building grand cars for the rich, each with a large profit margin. Ford advocated building simpler, less expensive cars that would yield a smaller profit per car but might expand the market. By selling more cars, he reasoned, the company would make more profit. 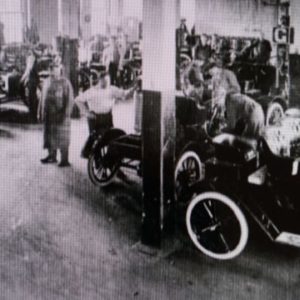 The directors who favored expensive cars had their way in April 1906, whenthe company introduced the Ford Model K, a large and expensive car. But a series of events soon led to Henry Ford buying out the leader of the big-car contingent, Alexander Malcomson, and becoming President of Ford Motor Company.

For a while, he was stuck with the big Model K. However, the company also had a new four-cylinder car, the Model N, which came close to realizing Henry Ford’s vision. By the end of 1906, the company had shipped 2,194 Model Ns to dealers around the country. That number seems small today; but in 1906, when cars were still a hard sell, it was remarkable. The Model N became America’s best-selling car, though Henry Ford knew he could improve on it.

DEVELOPMENT OF THE MODEL T

In January 1907, Henry Ford ordered a “secret experimental room” be created in the back corner of the third floor. One side was a drafting room; the other side had a few machine tools, a chalkboard, and his mother’s old rocking chair. It was a place for his hand-picked team to focus in private on developing new ideas for a new car. Other than Ford, who turned 44 in 1907, the key people working in the experimental room on a regular basis were all in their twenties.

Prototypes of new parts were tested on a Model N chassis to reveal any flaws. Sometimes they had to go back to the drawing board until they got it right. Finally, in spring of 1908, workers built a few complete Model Ts for testing. The car was everything Henry Ford had hoped for. The Model-T was a lightweight, inexpensive, easy to drive and repair. It performed well on bad roads, and seated five.

Advance publicity resulted in a flood of orders months before the car was in production.

The first Model T built for sale was completed on September 27, 1908. Production began with a trickle—just 11 Model Ts were built in October. By December, production rose to 200 cars a month. Soon, every available inch of the plant was devoted to the enormously popular car. Engines and axles were assembled on the ground floor. The second floor housed light machining and sub-assembly.

By the end of 1909, a new plant in nearby Highland Park was ready, and automobile production was transferred from Piquette Avenue to Highland Park in January 1910.

In just five years, the building had served its purpose, launching several automotive legends: the Model N, the Model T, Henry Ford, and Ford Motor Company. Ford’s next revolution—a manufacturing revolution—would play out over the next few years at Highland Park as the company developed the automotive moving assembly line and the Five Dollar a Day.

Five Innovations That Helped Make the Model T a Legend

The ramifications of the innovative Model T were truly revolutionary. Some were immediately apparent, such as the rush of America’s farmers and rural families to buy the efficient, rugged, low-priced auto. Other effects—good and bad—took years to develop, such as changes in the landscape to accommodate legions of cars, higher wages for manufacturing jobs, auto-related pollution, and a culture of easy mobility.

These are five of many features and innovations that helped make the Model T a legendary automobile.

Flywheel magneto—look Ma, no batteries!
Many early cars, including Ford’s Model N, used batteries to supply electricity to ignite the gasoline; however, batteries eventually run down. Some cars used magnetos to generate electricity. Mounted under the hood, they were driven off the engine’s crankshaft. The Model T’s magneto takes advantage of the fact that an engine’s flywheel is always turning when the engine is running. Magnets on the flywheel rotate past wire coils mounted on the rear of the engine, generating electric current in the coils. So Model T owners didn’t have to fuss with batteries and always had power to start their cars!

Planetary transmission—easy to drive
By 1908, most cars had sliding gear transmissions, in which a lever moved spinning gears from one position to another. They were rugged and efficient, but shifting them smoothly was tricky. Ford chose to use an older style planetary transmission that was less suited to large, heavy cars but worked well in the lightweight Model T. The planetary was easy to operate, especially for people who had never driven a car before. Those people were his target market!

Flexible chassis—bends but doesn’t break
Most American roads were just dirt paths in 1908, full of ruts and bumps. Most carmakers dealt with this problem by making their cars big, rigid, and heavy; but Henry Ford made his Model T small, flexible, and light. The front and rear axles pivoted freely, and even the frame was flexible. Like a willow tree bending in the wind, the Model T twisted with ruts and bumps but did not break.

One-piece engine block with removable cylinder head—less expensive to make, easier to maintain
The Model N engine was typical of the period: three separate castings—a crankcase and two cylinder castings—bolted together. The Model T cylinders and crankcase were cast as one piece. This was lighter, required less assembly, and was easier to manufacture. In 1908, the Model T was the only American car made this way. Its removable head was easy to manufacture and made maintenance easier.

Lightweight—better performance, lower price
The Model T’s light weight gave better performance, better fuel economy, and used less material, making the car cheaper. How could it be lighter but still perform well? Many parts were made of vanadium steel, which was stronger than carbon steel, meaning they could also be smaller and lighter. In addition, the one-piece engine block was lighter than the Model N’s three-piece block, and the T used only one spring on each axle, while most others had two or more.